Travis Scott’s Fortnite performance attracted 28 MILLION people! How else did he CASH-IN? 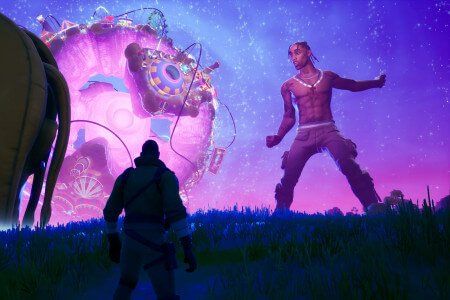 Travis Scott just set a viewership world record! But how did his social media following, Spotify album streams and more benefit from this move?

We at Rise at Seven have taken a look using social media monitoring and growth and listening tools to see exactly who the real winner is here!

Travis Scott took virtual performance to the next level recently, heading to Fortnite to deliver an EPIC set to its users. However - this move not only set the bar for creativity and entertainment, but set a viewership record too!

Because of the huge turn-out, Epic Games have set additional ‘tour dates’ for Travis to perform virtually again to fans across the globe. He now has his own player outfits, emotes, gear and accessories on the game as well as signed deals for his own nerf gun, jerseys and an action figure to be made. In short, Travis Scott is CASHING IN on this massively.

Using Buzzsumo, I found that 9,478 media publications covered this story from the likes of CNET, Ladbible, TMZ and more. Social media went crazy for it, with celebrities and huge gamers with millions of fans talking about it on their YouTube channels.

It is said that Epic Games and Fortnite approached him for this deal, so we expect Travis to have made big bucks on that initially - but how else is Travis benefitting from this when it comes to wider online platforms?

How Travis saw a 1.4 million increase in followers in 7 days

As a data and insights obsessor, I took a look at the growth of Travis Scott's social following across platforms including Instagram, Facebook, Soundcloud and Spotify across the week of his performance to see what happened.

I also spoke to the guys over at live concert ticket retailers, Vivid Seats, to see what they saw when it came to gig tickets and virtual performances surrounding Scott.

Here's what I found…

Using SoundCharts insights tool I found that Travis gained an extra 1,438,056 million followers in just 7 days during the event across Instagram, Facebook, Dezeen, Soundcloud and Spotify, with his Instagram channel benefiting most.

Scott racked up 1.08 million Instagram followers during that period, bringing him to a total of 27.6 million followers on the platform. Spotify saw a bigger impact that Soundcloud with an extra 288,000 followers in that week, but what really saw a boost was the number of streams of his singles as part of the Astroworld album.

Taking all data into consideration, Soundcharts states that Travis’s global fan base (all music and social platform following) now sits at 42.5 million.

Using Spotify, I discovered that in that same period of 20th-26th April, Travis’s music on Spotify was streamed 81.9 million times! And if you don’t already know - artists make money per stream through Spotify.

A Pay Per Play study reveals that artists can earn $0.00437/£0.0034 per play on Spotify, offering more money per play than Napster, Amazon and Youtube. Doing the calculations - this means that Travis pocketed £288,131.06 in just 7 days because of this! Easy money, right?

And whilst digital streams don't make as much money as ticket sales, online ticket retailer Vivid Seats reveals that Travis saw a whopping 419% increase in demand for concert tickets during the Fortnite tour. Everyone might be tuning in to see him perform virtually, but they still want to see the artist make his magic in real life.

If you can turn eyeballs into pounds to pocket - this is how to do it!

Travis took his whole global fan base up a notch by touching a market he maybe didn't even consider initially, even inspiring a whole new generation of creatives.

Fortnite reigns supreme as the biggest game in the world, creating dance moves to trend across a young audience, with many of those in hip hop. It seems the Travis and Epic Games collaboration on Fornite was the perfect move and they're looking to create even more organic partnerships with Hip Hop moving forward.

Let's talk data, grab me on Twitter or LinkedIn